We're back after a three month hiatus.  Our meeting was on August 17th.  I decided to use the Prairie Home Cooking cookbook and did three recipes from it.

The first one (top left) was Honeyed Carrot-Ginger Marmalade.  the recipe was easy to follow and did not cost a lot to make.  Grating the carrots and ginger was a real pain in the neck.  The cookbook said you could cook the marmalade in a slow cooker.  I did that and the the taste was Good but the marmalade needed a thickener.

The second recipe (top right) was Pasta with Tomato Sauce Simmered with Pork.  Again the recipe was easy to follow and did not cost a lot to make.  Taste was Good but I like a thick sauce with my pasta and this was not a thick sauce and it needed salt.

The third recipe(bottom center) was Irish Potato Griddle Scones.  Easy to follow and not expensive to make.  Taste was Nothing Special, it needed salt and pepper. 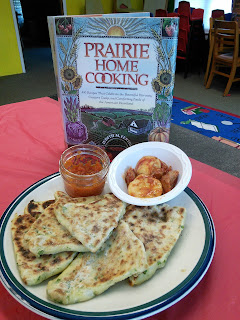 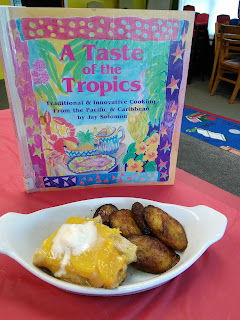 Ruby used A Taste of the Tropics cookbook.  She tried two recipes.

The first (left side of plate) was mango Cobbler.  The recipe was easy to follow and not costly.  Taste was Good but she would add almonds to the crust.

The second(right side of plate) was Fried Plantains.. Again easy to follow and not expensive to make.  Taste was Very Good and she would not change a thing to the recipe.
Posted by Barbara at 7:22 AM No comments: